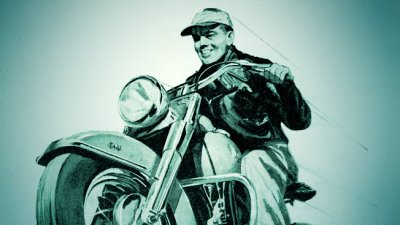 As much as we all love our classic chrome-coated fenders and the “potato potato” noise of the V-twin motors, unlike many companies, Harley-Davidson has survived this long because not just because of a great product, but also due to a few of their little secrets.

Harley-Davidson’s ads have been essential to their success and has not only helped them survive the Great Depression but become worldly recognized.

Harley-Davidson’s task of selling their bikes isn’t as easy as it looks. Through many decades and economy changes later, Harley’s have still been able to aim to the right people, the right way, at the right time. But how?

Sure, the men in the ’50s on their Harleys looked like happy guys on top of their bike, but Harley-Davidson’s advertising department worked hard to get that message across. They didn’t ignore what was going on in the world. The 1950s was the postwar period and suburban men were looking for a way to “combat the confinement of civilian life.” Yet, this was also a time when people started to have negative perceptions of motorcycles. So how did Harley-Davidson survive? Well, they changed the way they advertised themselves, they started to focus more on the engine specs and it’s overall mechanical performance. “This was also the era of the unique selling proposition” (Katherine Wintsch, founder of The Martin Agency). “They’re pointing out the features no other brand has.” In an era of motorcycle gangs and threatening images of loud motorcycles, Harley-Davidson stayed clear of this stereotype. They have succeeded for doing this for many decades to follow.

The ’90s is another example of how Harley-Davidson’s rep was able to stay alive even while the world around them was drastically changing. Instead of focusing on male riders the brand’s more recent overtures to people of color and to women. Women today have grown a lot more independent than they were in the ’50s and Harley was aware of this change. They started placing female models on bikes and stayed away from “the woman as a paranoid passenger. She’s not gripping onto her man who’s driving” (Wintsch). Not surprisingly, the the percentage of their sales to females has grown from 5% to nearly 11% in the past decade.

Never let your company be a step behind. Learn from Harley-Davidson, you must stay on top to succeed.

Subject Lines for the Best Email Marketing Campaign Ever