It seems I’ve been talking to people about nothing but Facebook lately. I have had so many inquiries from businesses or entrepreneurs who say something along the lines of “I want to do a site like Facebook, except ours will…” that talking about a new web project with us lately seems to center on little else.

Its exciting that Facebook gave us their Facebook Connect interface which allows us to build online communities that utilize your FB login, as well as all your profile information. So I would ask you: why try to start your own social network right now that just creates another ‘silo’ of friends, photos, and information. People have too many silos as it is: MySpace, Facebook, LinkedIn, Youtube, the list goes on and on.  And, it should be mentioned, that people will ultimately grow tired of your silo when they decide not to keep up with so many accounts across so many sites. People are already tired of the silo effect- how many Facebook users do you know that converted from Myspace?  Yeah, that’s what I thought- a lot, and that’s pretty common right now.

Facebook gives us the answer by providing a single login that will work on any site that uses Facebook Connect. So now, instead of building your own social network, you just piggy-back on FB’s unbelievable success (85% growth in 2008 is not too shabby).

We’ve signed several of these projects lately and that’s a trend that is going to continue, unless I miss my guess. What’s got me 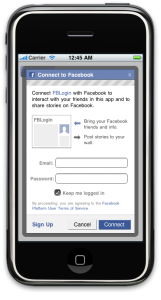 excited today is that the good people at the ‘book have continued their movement towards a more socially connected Web and provided Facebook Connect for iPhone. With 30 million iPhones sold, that means that we have another rich and engaging platform that we can now access and interact with using the social network that everyone seems to be a part of these days.

I was talking to the guys at Resolute Games about an idea that I had for an iPhone app that we could then offer to our customers. I’m just dying to find a project where we can develop an iPhone app that will somehow tie into our other Internet marketing efforts on some project or another. Talk about having some potential to engage your audience… iPhones and Facebook seem to be a match made in heaven for time-killing!

Small Business Chamber – Memphis, TN How to Use Social Media Marketing for Business
Scroll to top